The shorter and simpler version:

The ideal loudspeaker is a single full-range point source with perfect frequency response, dispersion and transient response. To achieve ideal performance is currently (and likely to be always) impossible with a single driver. However, the fewer components we use to get close to ideal performance, the better. 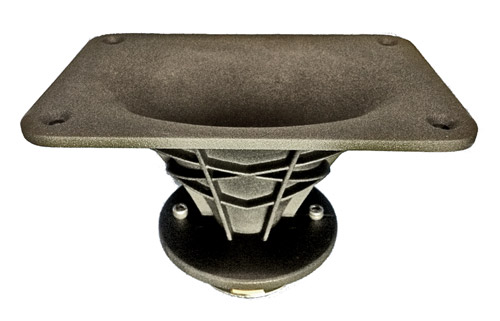 The longer and more complicated version:

The goal behind our Big Series cabs has always been to achieve as accurate frequency response and polar response as possible, with as high maximum output as possible from a given enclosure size - so that you (and your band and your audience) can hear your true tone however loud the gig is. This is extremely hard to do!

The first generation Big Series cab, the Big One, was a 2-way design with 15" woofer and 6.5" midrange driver, with an 800Hz crossover point, with pretty even response from the 40Hz region up to 10kHz. The last few Big One cabs were Big One T, so 3-way designs with 15" woofer, 6.5" mid and small horn tweeter, with the mid-tweeter crossover happening in the 4-8kHz region, with the tweeter taking the response out to 20kHz.

Our second generation designs, the Big Baby, Big Baby T, Big Twin and Big Twin T, used a 12" woofer with a new 6.5" mid and the same small horn tweeter, available as 2 or 3-way designs due to the tweeter being optional. The new woofer exhibited lower distortion and better polar response due to its smaller stiffer cone and allowed us to raise the woofer-mid crossover point to 1kHz for increased power handling whilst the new midrange driver also exhibited lower distortion and better polar response, though less extended treble response. This new treble response curve worked better for crossing over to a tweeter, particularly around the on-axis area.

So what were some of the limitations of the second generation design? Although the on and off-axis response is very good at low levels, once the voice coils get hot the crossover points and slopes would shift (this happens with all passive crossovers) which changes the response curve. The off-axis response through the treble region isn't as flat as could be because the midrange driver runs quite high before it acoustically crosses to the tweeter. The character of the midrange driver has a habit of showing off amp clipping prematurely, something common to most 3-way bass cabs, which combined with the less high sensitivity of the cabs meant that they demanded more powerful amps to work well.

Having done a lot of investigation, we concluded that with the right 12" driver and larger HF driver we could solve all these issues. We set out designing some new drivers in April 2011 and went through numerous iterations before we finally reached our goal. One of the key characteristics of our new 12XN550 is that that the voice coil, cone, surround and dust cap have been designed to work together to give the right treble response curve, and maintain that curve as well as possible both on and off-axis. This meant that we could remove the key components from the signal chain which were causing the response to change at high SPL due to voice coil heating. And by removing these components we also reduced the harmonic distortion, especially at high power levels, and improved the transient response. A convenient side effect of this is also slightly reduced component cost and weight, which is reflected in the final specs of the cabs.

Our new HF driver features a large constant directivity waveguide which has similar acoustic dimensions to those of the 12" driver (the radiating area actually shrinks at higher frequencies as the cone turns from a pistonic to bending radiator) at the crossover point, so they blend almost seamlessly. It exhibits very even response off-axis (thanks to the waveguide) and very high sensitivity (due to the powerful neo magnet compression driver). The HF driver requires a large number of components to mirror the response curve of the 12" driver which all been chosen for minimum distortion (heavy gauge air core inductors, audiophile polypylene capacitors, non-inductive ceramic resistors). The very high sensitivity of the HF driver and the easy duty cycle (low average to peak power ratio) means there is lower voice coil heating at high power than with the previous generation's mid and tweeter and the crossover also contains components which help stabilise the response at high power. The end result is extremely consistent frequency response from studio recording situations using a fraction of a watt to loud gigs peaking at over 1000W.

The acoustic crossover of the system is very close to a perfect Linkwitz-Riley 4th order function, in the 2-3kHz region, which results in very good polar response and excellent power handling. A typical 4x10" has audibly poor performance as you move off-axis, exhibiting a notch about 20dB deep, centred at around 800Hz (where a lot of bass guitar tone happens) and almost two octaves wide - in a similar off-axis position our new Big Series design merely has a shallow dip centred around 1.8kHz. This is about a twentieth as serious - in most rooms you won't hear it at all. Our second generation 3-way design was flatter off-axis through this region but less even from 2kHz upwards and the fact of the matter is that the 1.5-2kHz region is not one which sounds especially great on bass guitar or double bass whilst there's much nicer treble happening up above, so our new design simply sounds better (as well as measuring better for the most part). A great comparison for us was playing recorded music back through both generations - the 3-way cab sounds excellent, better than many good hi-fi speakers but the new 2-way model sounds much more real, 'lighting up' the room with the music with the speaker almost sonically disappearing.